I confess to liking old roads and old ways. I’m not much of a historian, nor much for history; however, perhaps because I spent a lot of time travelling in my Dad’s lorry when I was young, old roads and trackways intrigue me. If I catch sight of a linear hollow in the landscape, I always wonder if it is the remnant of a holloway.

The black and white photo at the head of this post shows various tracks and holloways leading up over a ridge on Salisbury Plain. The area of the Plain shown in the photo is under military control; a training area covers roughly half of the Plain and is the largest military training area in the United Kingdom. The photo shows various tracks cut by military vehicles over the years, but very obvious is the holloway curving across the hill, upward and to the left, and then straight up across the landscape to the horizon.

Here is a view from a slightly different angle, and in colour. I couldn’t resist photographing it again yesterday; the shadows and curves always catch my eye. 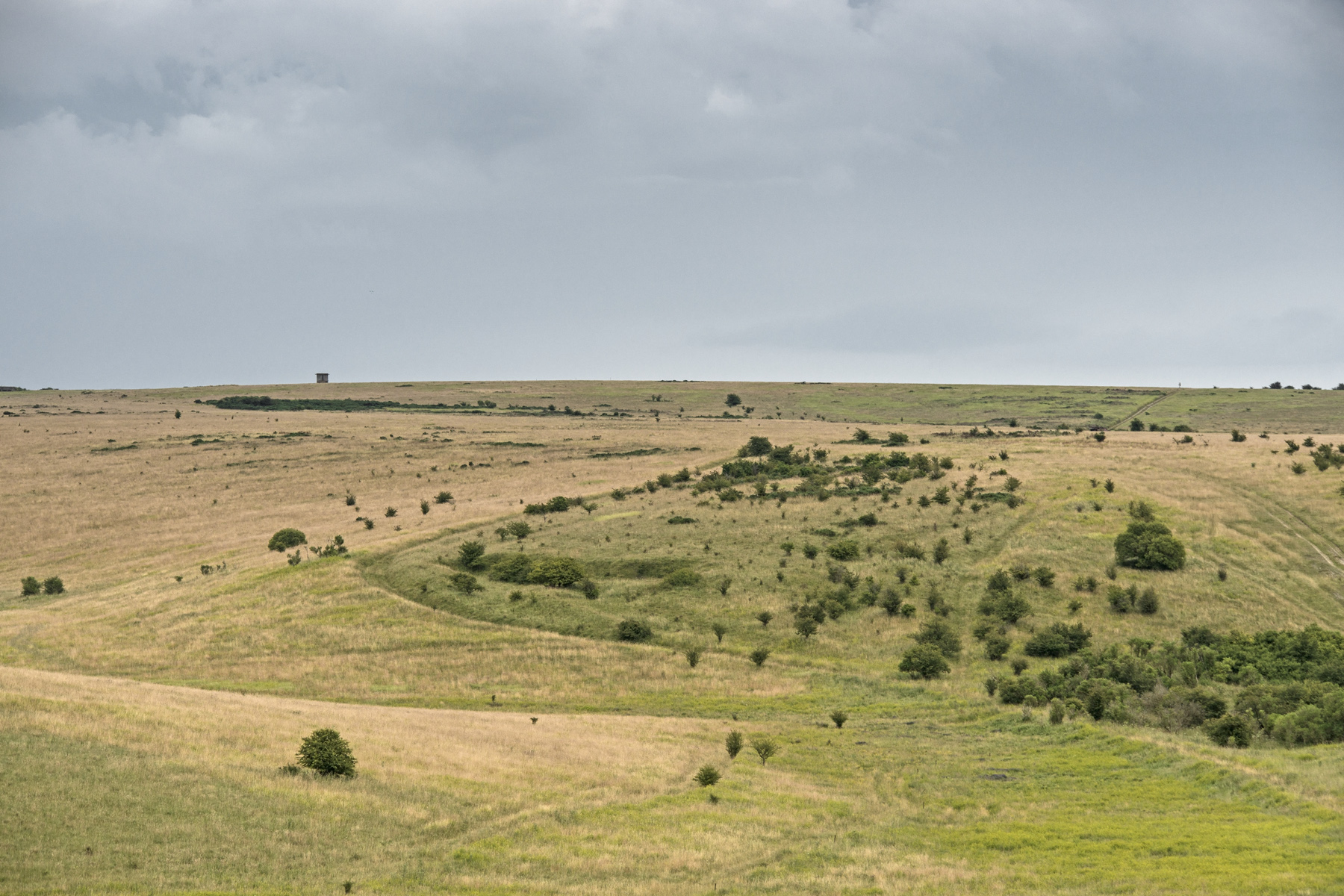 I have confirmed that, at least in the 1890s, this was the most obvious “way” to Market Lavington, as can be seen here, the 1889 Ordnance Survey six-inch map for the area — look for Candown Farm and Grove Down in the top right-hand quadrant of the map (and if you like maps, check out the treasure trove of maps at the National Library of Scotland).

If you check that map, and look at the Google Maps aerial views for the same area, you can trace the way across the Plain. The Plain is now crisscrossed with tracks — the older byways and tracks often head into areas littered with explosives, and the military have rerouted byways or added new ones.

If you were to follow this way across the Plain, however, you would end up at a junction with the old toll road that crosses the Plain and connects Devizes and Salisbury. At that junction is the old iron finger-post that would have given directions on the roads. 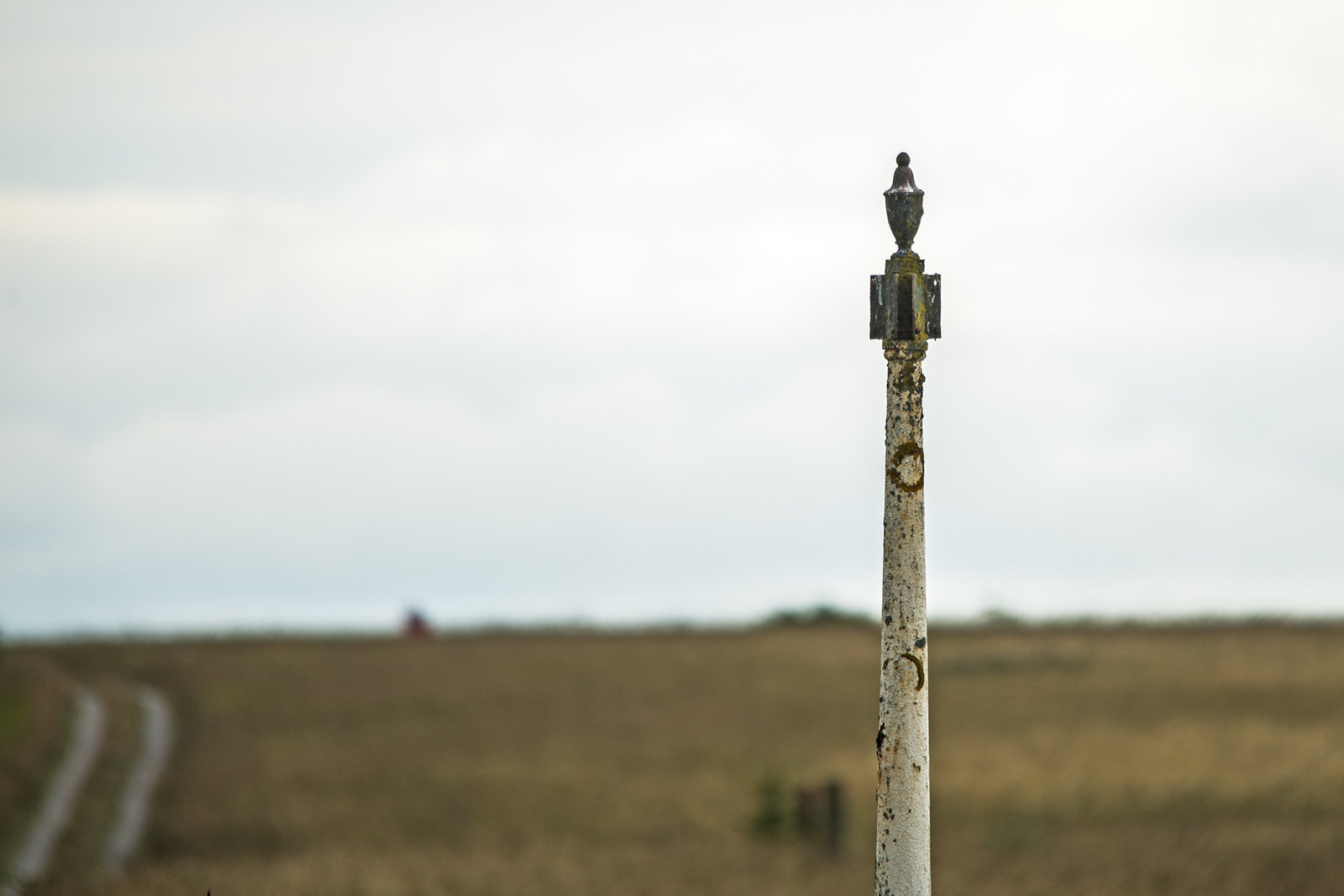 The Old Fingerpost on the Toll Road

Here, you can see on the left of the photo the trackway that leads from this junction and would, in a couple of miles, sweep you down the hill, around the bends, deep in the holloway, through Candown Bottom and then on to Market Lavington.

If the signpost still had its fingers,I’m sure the one on the left would indicate Market Lavington, the one on the right, Devizes (or possibly Urchfont), and the one facing us would say Salisbury.

When looking at the OS maps, and the Google Maps images, it becomes obvious what a web of small tracks and byways once crossed the countryside, joining together farms, villages and towns, and connected to the toll-roads and highways.

There has a been much rain in the UK over the Christmas and the New Year, enough to cause floods and disruption. In the parts of Wiltshire I travel, the rain has manifested mainly as surface water on roads and in fields. I have travelled over Salisbury Plain taking photographs perhaps four or five times. It was a surprise, therefore, to find on this weekend’s trip two winterbournes in places I normally associate with grass and gorse and trees.

For those who don’t know, a winterbourne is a river or stream that rises in the winter, after the heavier rains – hence, winter-bourne. The word can be found in place names such as Winterbourne Stoke – which is, indeed, where I first realised the significance of the word, about 30 years ago, driving through the village in winter and for the first time noticing a stream there.

On Saturday, we went for a drive over the Plain, looking for landscapes and starling clouds and birds of prey. I thought to get to the Plain via the byway that leads from the tiny hamlet of Compton. However, this attempt was thwarted by a most spectacular winterbourne that was using the byway as its bed. This was the view that greeted our approach:

Further down the road, the byway cuts between banks two and three feet deep. I only risked going as far as the second telegraph pole, before turning around and coming back.

However, intrigued, we had to know what the winterbourne was like half a mile down the track, where it met the byway to Larkhill. So, we took to our heels, and drove Foxy to the byway above Compton, which also meets the Larkhill byway, and then down into the valley and the lower Compton byway.

The byway to Larkhill is here made up so that it is embanked; beneath the embankment runs two pipes.I had always supposed that during heavy rain the water would run off the sides of the slopes of the combe in the Plain, and that the pipes had been put in place for the purpose of draining away rainwater. I hadn’t realised that a new river might rise for a while, nor how forcefully and fast the water could flow in such a short distance from wherever its spring head might be.

What’s more, because the Larkhill byway is embanked, and the pipes only allow a certain quantity of water to flow through, the embankment acts as a dam, and has helped to create this brand new pond:

The New and Temporary Compton Pond

After admiring and photographing this pond, and this winterbourne, Lizzie and I set off on our usual slow meander around the byways. As usual, we had a particular route in mind that takes us a little deeper into the centre of the Plain, and where we stop for a cuppa — yes, sadly, we do take a flask of tea with us….

We normally stop near Candown Copse. This is on the side of another shallow valley or combe, the bottom of which is called, perhaps unsurprisingly, Candown Bottom. And, yes, this valley had also sprung a winterbourne. The photograph at the top of this post shows the bourne heading downstream. In this case, the valley is anyway where the brook called the Till rises, and then heads through Tilshead. This season, though, the rains have made the springs rise further up the combe. Again, the byway here has been embanked, and single pipe channels the water beneath it. Here, the new winter pond is more like a lake…

The New and Temporary Lake at Candown Bottom

Trees Dipping their toes in the New Lake at Candown Copse